Kelly Bisignani has been an active volunteer in the Greater Latrobe School District for over 12 years.  Kelly has four children, two of which have graduated and two are currently enrolled.  She is a 1991 graduate of the University of Notre Dame with a post-baccalaureate certificate in Cytotechnology from Jefferson Univ, 1992.  Kelly earned her MBA from DeSales University in 1998.  She worked in the Pathology Department  at Polyclinic/Pinnacle Health Systems in Harrisburg from 1993-1999.  She and her husband Geoffrey relocated to the Latrobe area in 1999.

Paul is active in the Westmoreland County community, including: Chairman of the Board for the Economic Growth Connection,Westmoreland Airport Authority Board Member and Treasurer.  He is the past United Way Chairperson,Past Chairman of the Westmoreland County and Greater Latrobe and Grove City Chambers, Past Chairman of the Board of Trustees of the Catholic Institute for the Diocese of Greensburg,and Past Chairman for the Westmoreland Heart Walk. He is a past Rotarian and is a Paul Harris Fellow.  Paul is an active NCAA & PIAA Basketball Official and WPIAL and PIAA Championship Official.  Paul is a graduate of Clarion University, The Central Atlantic School of Banking, and the BAI Executive Management School at Emory University.  Paul and his wife Laurie have 4 children, Megan, Emily, Jacob and Haley, that graduated from Greater Latrobe Senior High School.

Kayla Sutton graduated from Greater Latrobe in 2006 and went on to receive her B.S. degree in Early Childhood Education. Kayla considers her biggest role at the moment – raising her three sons, who are ages 7,5, and 4. Kayla works at Aggressive Grinding Services, Inc. as an administrative assistant and helps in her childrens’ schools as much as she can. According to Kayla, “Being an educator and involved in my son’s school (Baggaley Elementary), I get to witness firsthand how beneficial an organization such as the GLPIEF is to our students, teachers, and schools. I am very eager to be a part of such a wonderful organization with such impactful members.”

GLPIEF is an independent public charity dedicated to encouraging community-wide participation and philanthropy in order to enhance and expand enrichment opportunities for all students in the Greater Latrobe School District and insure long-range financial flexibility for schools within the District. Visit glpief.org to learn more. 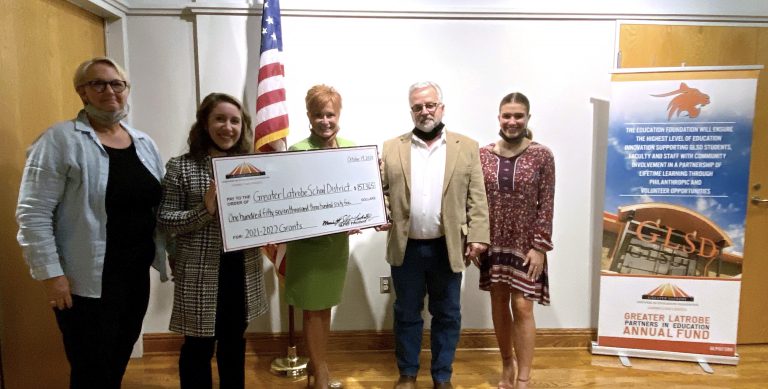 The Greater Latrobe Partners in Education Foundation(GLPIEF) is pleased to announce $157,365 in program grants to the Greater Latrobe School District (GLSD).  GLPIEF is able to provide these grants through the support of donations from GLSD staff, parents, alumni, community members and EITC business donations.      These grants are supporting the Leader in Me curriculum for…